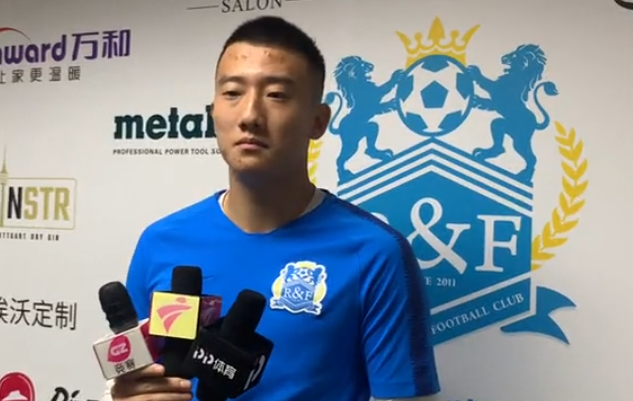 Hupu News on October 9th Today, Guangzhou R&F held a media open day at the Guangzhou University Town training base. The team’s main goalkeeper Han Jiaqi was interviewed by the media and talked about his first season as the main player and the arrangements for the National Day holiday.

I am more mature than before, gain more experience, and have improved in all aspects.

In that game, I exposed the problems of lack of experience and too heavy psychological burden, and I was also deeply impressed. This is also the process of accumulating experience.

I didn't think too much about this, but I still have to be myself and play well in every game.

Lei brother is like my big brother. He will give me a lot of advice and will also convey the concept of Huang Dao (Goalkeeper Coach Huang Hongtao) to us young players in another way.

I hope I can accumulate experience faster and become more mature. I also hope to help the team relegation as soon as possible and strive to win the first two games.

I also studied the video of the Qingdao Huanghai game, and have a certain understanding of the opponent's foreign aid. The opponent is the newly promoted horse this season, and he will do his best to relegation. It is also a difficult game for us.

I went back to Beijing during the holiday to spend time with my family. Because there was a lot of food that I couldn't eat during the closed competition in Dalian, the main purpose of going home this time was mainly to eat (laughs), and my favorite was the mutton.

But after eating, you still have to go to the gym to run and train, and to control your weight.

(Edit: Give everyone an early greeting)