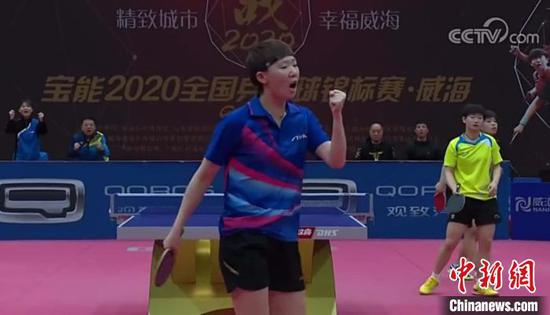 Wang Manyu in the game. Provided by the Sports Bureau of Heilong Province

This competition brought together all the top domestic players. It is not easy for Wang Manyu to break the siege and win two golds and one bronze. During the match, Wang Manyu wore a layer of bandage on her left knee. This injury also affected her performance in the game, especially in the women's singles semifinals. Wang Manyu lost to her with a 0-4 score. Women's doubles partner Chen Meng, unfortunately missed the final.

Although he was injured, Wang Manyu's performance in the game is still remarkable. Especially in doubles matches, she cooperated with her partner tacitly, and dealt with the key ball without rush or rash; when she fell behind, she could deal with it calmly, step forward and turn defeat into victory.

Award ceremony. Provided by the Sports Bureau of Heilong Province

In the mixed doubles final on October 7, Wang Manyu and Wang Chuqin partnered to defeat Xu Xin/Sun Yingsha 4-1 to win his first gold medal in the current championship. In the women's doubles final on the last match day, Wang Manyu/Chen Meng (Mengyu) combined with Sun Yingsha/Wang Yidi (Shadi) to present a wonderful battle for the audience. The final was intense. In the case of a lagging start, the "Mengyu" combination made adjustments in time, and the score was also chased from 1 to 1, to 2 to 2, 3 to 3. In the crucial decisive game, the "Mengyu" combination was unrelenting and defeated the "Sadi" combination 11-6 with a total score of 4-3. This is also the first time Wang Manyu won the women's doubles gold medal at the National Championships. Like Chen Meng, he won the second gold in this tournament.

"Knee injury does have a certain impact on my performance in the game. However, I adjusted my mentality in time, played steadily, and worked hard and won two doubles titles. I am very happy. This is also for me. An affirmation of training and preparation for more than half a year. Next, I will sum up the experience and deficiencies of the game, and actively cooperate with the left knee injury. I will also go all out to prepare for the World Championships and the Olympic Games. "Wang Manyu is winning the women's doubles championship. Said later.

As the oldest, largest, and most influential traditional table tennis event in China, the 2020 National Table Tennis Championship is also the largest national table tennis event since the outbreak of the new crown pneumonia this year. It is also the preparation for the Chinese team. A major training for the Busan World Table Tennis Championships and the Tokyo Olympics. (Finish)