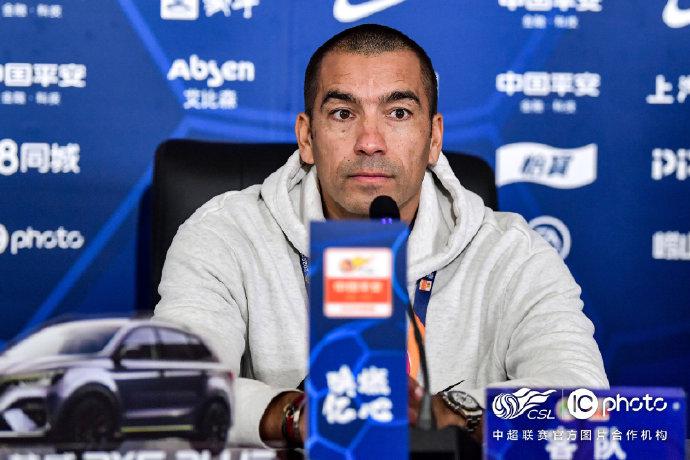 Yesterday, the relegation group of the second stage of the 2020 Chinese Super League ended the last battle of the first round. As a result, Guangzhou R&F and Qingdao Huanghai Qinggang each had a goalless draw. This was the first draw of the relegation group. After the game, R&F coach Van Bronckhorst said: "You can't win or lose in the first round; in the second round, you must break the dense defense. The only goal of the team is to score goals."

In the first half, the two sides did not have too many good offensive opportunities, and Adrian and Alexandrini also failed to seize the rare opportunity. In the second half, Gao Xiang missed the opportunity. In the 78th minute, a corner kick from R & F, Chen Zhizhao volley was saved by the opponent goalkeeper Liu Zhenli, and then Ye Chugui made a supplementary shot in the chaos, but the referee determined that the ball was offside due to Dembele after VAR decided The first was invalid, and eventually the two sides handed in a blank paper. In addition, R&F midfielder Dembele was named the best of the game, while Huang Zhengyu and Chen Zhechao retired from injury.

After the game, R&F’s new aid Adrian said in an interview that he and the team had a good fit. “Everyone’s tacit understanding is okay. The game is a two-round system, so the team still has one game to play. Our goal is very good. To be clear is to win the game and complete the task of relegation."

At the press conference after the match, Fan Shuai said: “I think R&F is not in the best condition in this game. The passing rhythm of the first half is relatively slow. In the second half, we can see that the team wants to win the game in the final stage. The offensive investment is relatively large, but the defense is not done well. The opponent's counterattack points are exposed, which is more threatening. , We will go back to summarize this point. No matter what, the result of 0 to 0 kept both sides on the same starting line. I hope the team will go back to summarize and prepare for the second round of the game, and hope to have a better performance by then."

Fan Shuai said that the result of the tie is acceptable. He said: "Each coach wants to lead the team to victory before the game, but the opponent has a tight defense and does not give us much room to attack. We only have two or three opportunities. I also told the players in time. You can’t lose. If you want to attack too much and miss the defense, it’s very dangerous.” It’s worth mentioning that in the first three games of the relegation group, the team with the best possession of the ball lost. R&F’s possession rate was the same yesterday. Dominated, but only got a draw. In this regard, Fan Shuai said that he was lucky because his opponent almost succeeded in the counterattack. What is satisfying is that R&F's performance is not enough to support the team to win, but it did not lose.

Fan Shuai further emphasized that under the special circumstances of this year, the unusual knockout system will increase the contingency of the game, and relatively less optimistic teams will have more motivation to win. Therefore, it is difficult to face every opponent. For this reason, R&F Fully mentally prepared; and after the first round, he believes that the players have accumulated a certain amount of experience and adapted to the atmosphere and the intense rhythm of the game. In the second round, they should be able to play more openly and go better. In control of the game, he still maintains a positive and optimistic attitude towards everyone and is very confident in the team.

In addition, Fan Shuai also commented on the performance of the two new players, "After all, this is their first official game after joining the team. It will definitely take time to get in touch. Although the opponent's defense is very tight, it limits our offensive space. But the ability of the new aid is still there. I believe that after going back to the summary and adjustment, the offensive end can create more space for foreign aid to create more threats." He said.

In the end, Fan Shuai said that he believes that Qingdao Huanghai will continue to fight back in the second round, and breaking the intensive defense has always been a world-class problem, but this is also the task and work of the team’s coaching staff. “We must continue to try hard to attack. To create more space and opportunities, the goal of the team (second round) is to win."

Indeed, R&F really needs to improve. Qingdao Huanghai coach Wu Jingui also emphasized that under the utilitarian situation of football, the responsibility of every coach is to achieve good results. The strength of Qingdao team is not as good as R&F, so they can only choose tactics that suit their own situation and improve their offense while defending. Efficiency, now we must focus all our attention on the second round and strive to perform at the best level.