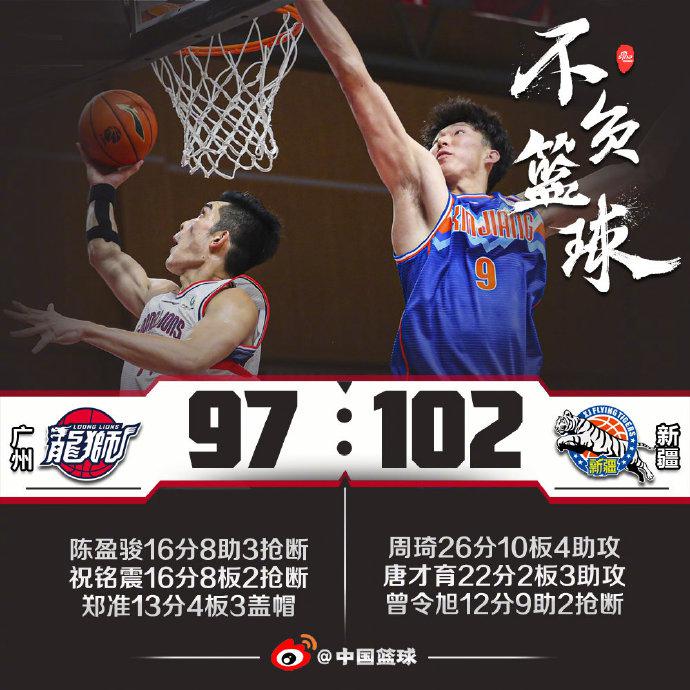 On October 18, Beijing time, the second match day of the 2020-21 CBA League regular season, double foreign aid Guangzhou played against Xinjiang in the all-China class. Guo Shiqiang ushered in his CBA debut coaching in Guangzhou. Zhou Qi scored 26 points, 10 rebounds and 4 assists. Tang Caiyu scored 22 points. In the end, Xinjiang, who scored in double figures with 5 players, defeated Guangzhou 102-97 to get a good start to the new season!

At the beginning of the game, Xinjiang took the lead. Zhou Qi performed steadily on both ends of offense and defense. The team started off with a 13-6 offensive lead. Jia Mingru then responded with a three-pointer, and the Guangzhou side chased the score to 10-13 after scoring 4 points. In the second half of the stalemate, Zheng Zhun was extremely active, and Guangzhou once surpassed the score to 22-19. In the face of Guangzhou's sudden pressing at the end of the quarter, Xinjiang's mistakes began to increase. Guangzhou succeeded in stealing a wave of 9-2 offensive to open the difference to 10 points. At the end of the first quarter, Guangzhou led Xinjiang by 10 points 31-21.

In the second quarter, Xinjiang had problems on the offensive end. Guangzhou continued to play a wave of 6-2 and pulled the score to 37-23. Zhou Qi hit continuously to help his team stop the bleeding, and Xinjiang gradually narrowed the difference to 10 points. Guo Shiqiang immediately suspended and returned to Xinjiang to step up offensive efforts. Errors on Guangzhou's side began to increase. Tang Caiyu and Zeng Lingxu hit three-pointers. The team set off a 12-0 offensive climax in the second half of the team to overtake the score to 42-40. At the end of the quarter, the two sides were in a stalemate, Zhou Qi continuously cast assists to help his team go back to 49-48. Moore made two free throws and Guangzhou led Xinjiang by 1 point 50-49 at the end of the half.

In the second half, Refukatijiang was active in scoring consecutively. Xinjiang relied on its inside advantage to play a wave of 11-4 and then overtook the score to 60-54. Chen Yingjun and Moore scored 5 points together to help Guangzhou once narrowed the difference to 3 points, but Zhou Qi continued to output steadily on the offensive end, and Xinjiang still led by 7 points more than half of the three quarters. Guangzhou's turnovers continued to increase in the second half, and Zeng Lingxu hit a three-pointer to help Xinjiang widen the difference to 10 points. At the end of the quarter, both sides' field goal percentages dropped. With 52 seconds left in the third quarter, Jiang replaced Zhou Qi to step up offensive firepower. Liu Lipeng and Haas scored each other's points. At the end of the third quarter, Guangzhou was 68-76 behind Xinjiang.

In the last quarter, Xinjiang continued to exert force, Guangzhou's turnover continued to increase, the team played a wave of 9-5 to pull the score to 85-73. Zhu Mingzhen hit a three-pointer to stop the bleeding, but Tang Caiyu also followed the three-pointer, and Xinjiang still led by 10 points over half of the fourth quarter. In the second half, Guo Kai and Chen Yingjun were active, and Guangzhou once chased the score to 89-96. Tang Caiyu helped his team stabilize the situation by throwing and penalizing. Xinjiang led by 7 points with more than 1 minute left in the fourth quarter. At the end of the festival, Guangzhou made consecutive mistakes, Liu Lipeng hit a three-pointer and Xinjiang led by 8 points. Guo Kai hit the middle distance, but there was not much time left in the game. In the end, Xinjiang defeated Guangzhou 102-97 to get a good start!